Around 10:00 p.m. CDT on Thursday we arrived back in Cedar Rapids after approximately 20 hours in transit. We started the morning with a four-hour bus ride from Galway to Dublin Airport. Our flight from Dublin to Chicago went smoothly, and everyone seemed to enjoy the wide selection of movies individually available through the in-flight entertainment system. The last leg of our trip was a van ride from O'Hare back to campus. Our arrival back at Coe marked the end of a successful trip and course!
Posted by Brian at 10:30 AM No comments: 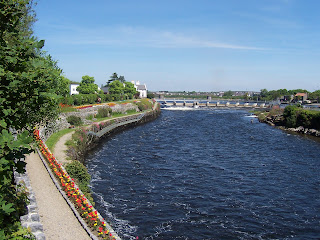 The River Corrib winding through Galway. 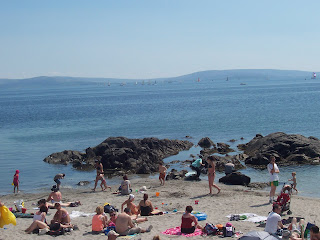 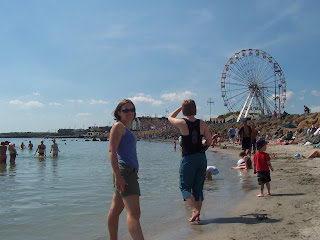 On the beach in Salthill. 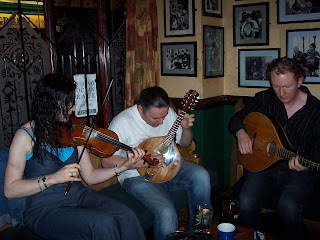 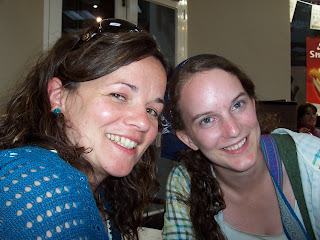 On Tuesday morning we travelled to the final desitnation on our itinerary, the bustling city of Galway on Ireland's west coast. Galway is a vibrant university town that serves as a gateway to Connemara, the Burren, the Arann Islands, and the Irish-speaking areas of the west. Galway has historically been an important port (Columbus stopped here before leaving for the Americas) and is currently serving as a stopover for the Volvo Ocean Race.

After a short walking tour of Galway's city centre and cathedral, we headed to the National University of Ireland, Galway, for a roundtable discussion with Anna-Marie and Dr. Shane Darcy. The Darcys - longtime friends of Sara's and mine - are both from the Republic of Ireland but lived for several years in Derry. The provided an interesting perspective on the impact of the conflict on those living on the border or far from the border, as well as the experience of being from "the South" and living and working in "the North."

Tuesday evening and Wednesday were free, and everyone enjoyed the continued good weather. A large contingent of students took a bus trip to the Cliffs of Moher on Wednesday afternoon, while others explored Galway or walked the Salthill promenade along Galway Bay. After a group dinner on Wednesday, we spent our final night in Ireland experiencing Galway's celebrated music and nightlife.
Posted by Brian at 9:57 AM No comments: 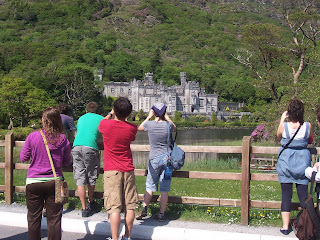 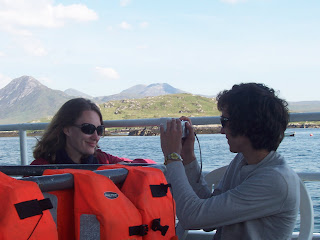 Photo op on board our glass-bottom boat cruise. 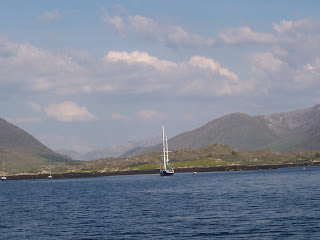 View of Connemara from Ballynakill Bay. 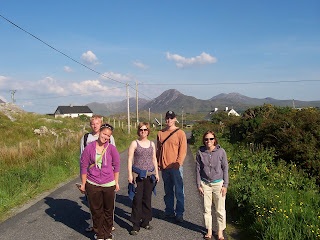 Walking along the road near Derryinver. 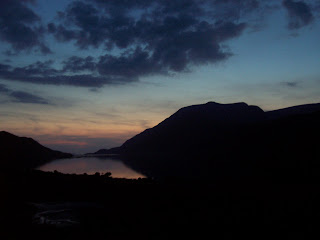 Our stretch of luck continued as we awoke this morning to another brilliant blue sky. The early part of the day was open, and everyone headed outside to take advantage of the warm, sunny weather. Most of the students hired a mini-bus for a trip to the beach, while a few others hiked the famine road along the fjord. All appeared to be pleasantly worn-out by the sun and breeze by the time they returned to the hostel mid-afternoon.

In the late afternoon we embarked on a group outing to the small village of Derryinver, stopping en route at Kylemore Abbey, one of the most beautiful buildings in Ireland. At Derryinver we visited a delightful family-run maritime museum and took a glass-bottomed boat ride on Ballynakill Bay. The clear water and bright skies afforded us a great view of the floor of the bay and its inhabitants, which included oysters, crabs, rays, and fish.

After another homemade dinner this evening, we had a productive class session. Students brainstormed and shared examples of the psychological concepts related to peace and conflict which they have observed during the past ten days. It is worth noting that we’ve been enjoying nearly eighteen hours of daylight in Ireland, and as we concluded our class at 10:40 p.m. the pink and blue of the western horizon was still reflecting off of Killary Harbour. The evening ended with an incredibly tasty midnight snack of fresh mussels from the harbour caught and prepared by students.
Posted by Brian at 6:25 PM No comments: 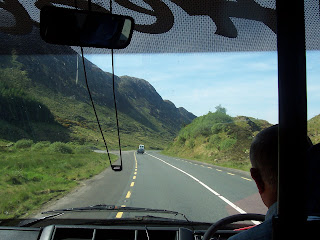 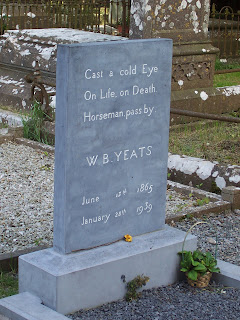 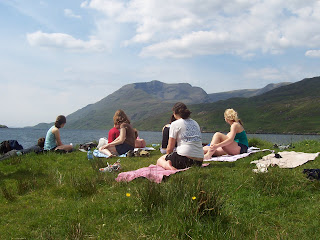 Students sitting along the edge of Killary Harbour, just yards from the front door of our hostel. 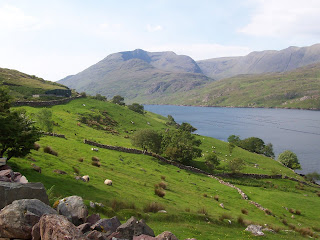 View of the Harbour from the famine road. 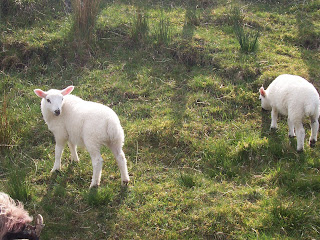 Having lived in Ireland for a year and regularly visited the island since, I feel somewhat confident in saying that our group is experiencing something very unique: it has been sunny, dry, and warm the past three days and it appears this trend may continue. Today we departed Derry early in the morning under a brilliant blue sky to commence our drive to Connemara, a rugged area on the west coast of the island. Our drive took us across the beautiful terrain of Donegal before we headed south through Sligo and Mayo, stopping along the way at Drumcliff to visit the gravesite of William Butler Yeats in the shadow of the mountain he called "bulbous Ben Bulben."

Amazingly, the skies were still blue by the time we entered County Galway in the afternoon. This was a particular treat as we arrived at one of the most spectacularly-situated hostels in Ireland, on the south shore of Killary Harbor, Ireland's only fjord. Most of the students spent the much-needed free afternoon basking in the sun along the harbor's edge. Sara and I enjoyed an exhausting but highly scenic hike on a "famine road" hugging the south edge of the harbor which was constucted by locals in exchange for food in the mid-1800s.

This evening we again took advantage of the culinary talents of our group members before meeting to begin analyzing our time in Belfast and Derry.
Posted by Brian at 6:15 PM No comments: 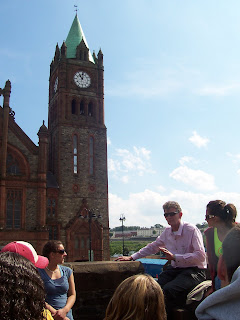 Listening to Jon talk about the civil rights issues surrounding housing in Derry in the '70s. 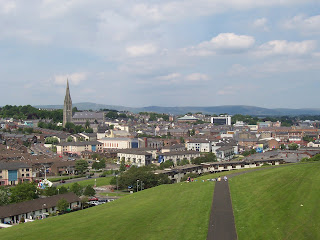 The Bogside from Derry's city walls.

Today provided our most intense glimpse into the conflict in Northern Ireland. We followed Jon McCourt as he retraced his footsteps during the eighteen fateful minutes on January 30, 1972, when fourteen of his neighbors and friends were fatally shot by British troops during a civil rights march in the Bogside, Derry's historically Catholic neighborhood. This was a highly emotional experience as Jon shared both his sense of loss and his sense of optimism for the future, while remind us that the potential for conflict exists wherever basic rights are denied to a portion of the population.
In addition, we visited the memorial hall of the Apprentice Boys of Derry Association which commemorates the actions of thirteen young men in preventing the capture of Derry by King James II in 1688, and walked Derry's city walls, among the best-preserved in all of northwest Europe.
Posted by Brian at 7:01 PM No comments: 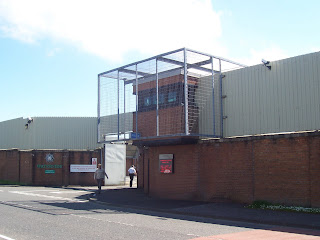 The public entrance to the PSNI's Waterside Police Station. 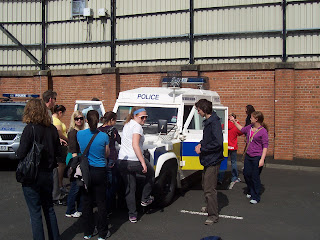 We began this morning with a visit to the Police Service of Northern Ireland's Waterside Station. This fortress-like compound was built in the 1980s with high walls around the perimeter and a main building designed to withstand mortar and grenade attacks. A constable of the PSNI explained the changes in policing during his 15-year career, revealing the current tension between "normal" policing and the ability to quickly respond to potentially violent incidents.

We then toured the Free Derry Museum and met with director John Kelly. The museum provides an outstanding account of the background to the Derry civil rights marches and culminates in the events of January 30, 1972: Bloody Sunday. Our time at the museum was particularly emotional as John shared the story of his younger brother, who was shot and killed by British troops on Bloody Sunday.

After lunch, we stopped by the gallery operated by the three "people's artists" who painted Derry's well-known political mural. One of the artists described the process through which the murals came into being, and told us a bit about the role of public art in resolution of the conflict.

The weather in Derry was fantastic today, and we took advantage of it by grilling out at our hostel. Hopefully the weather will hold out tomorrow for our tour of the city walls and the Bogside.
Posted by Brian at 7:02 PM No comments:

From Belfast to the Walled City 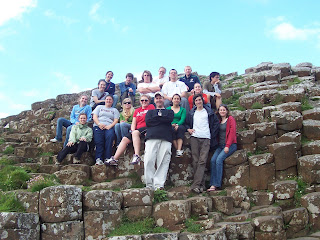 Our group at Giant's Causeway. 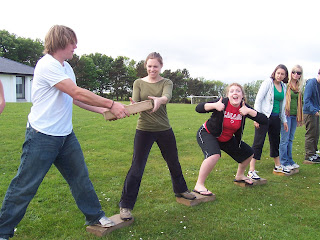 Participating in an activity at Corrymeela. 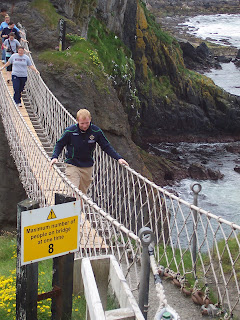 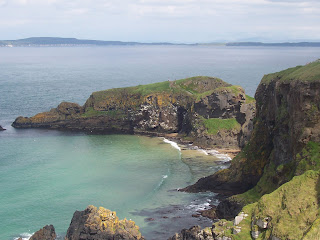 View of the Irish Sea.

On Thursday we travelled from Belfast to Northern Ireland's second-largest city, with several stops along the way. First, we stopped at the Corrymeela retreat center on the Antrim coast. Corrymeela is a nonprofit that facilitates peace and reconcilation efforts between and within a variety of communities. We spent several hours learning about the organization's perspectives on the conflict and its conflict resolution efforts, and particpating in some of the activities that Corrymeela uses in its work. We ate lunch at Corrymeela's communal dining room and enjoyed the stunning coastal location.

Our next stop was the Carrick-a-Rede rope bridge which spans the narrow but deep divide between the mainland and a small, rocky island off the Antrim Coast. Those brave enough to cross the rope bridge were rewarded with spectacular scenery and beautiful views of Irish Sea stretching off to Scotland. We then visited Giant's Causeway, one of the world's most famous natural features and marvelled at its hexagon-shaped basalt columns marching off into the sea.

Along our drive we skirted the city of Coleraine, which provided an unfortunate example that reconciliation in Northern Ireland is not yet complete. On Sunday one man was killed and others injured in Coleraine following violence directed against a Catholic neighborhood by a loyalist mob following a British soccer match. An article describing the situation can be found at http://www.belfasttelegraph.co.uk/news/local-national/dad-died-saving-man-from-mob-14313527.html.

Late in the afternoon we arrived in the city alternatively known as Derry and Londonderry. Because each of these names carries with it political and historical baggage, the welcome signs at its edge simply read "The Walled City." After settling into our hostel, we were treated to Irish stew made by four members of our group, and then headed to a local pub.